PEGASUS – The Myth behind the Name 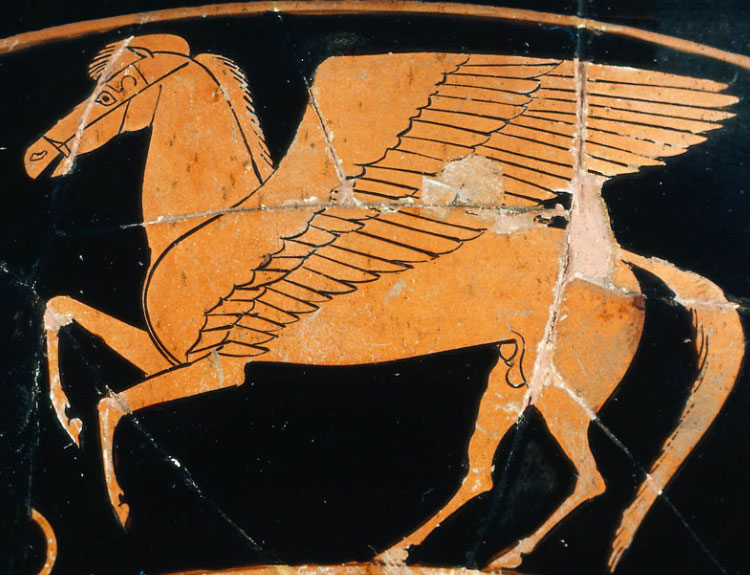 Pegasus, The Winged Horse In Greek Mythology
The winged horse, born from the liaison of the sea-god Poseidon and the beautiful Medusa. The liaison made the goddess Athena angry, and she cursed Medusa to be ugly and deadly. When she was killed, Pegasus sprang from her neck.

From his birth to his death, Pegasus remained a mysterious creature capable of everything, symbolizing the divine inspiration or the journey to heaven, since riding him was synonymous to “flying” to the heavens. Pegasus was represented as a goodhearted, gentle creature, somewhat naive but always eager to help.

According to legend, everywhere the winged horse struck his hoof to the earth, an inspiring water spring burst forth. Hesiod relates how Pegasus was peacefully drinking from a spring when the hero Bellerophon captured him. Hesiod also says Pegasus carried thunderbolts for Zeus.

For his service and loyalty, Zeus honoured him with a special immortality turning Pegasus into a constellation on the last day of his life.

In legend, Bellerophon, who became king of Corinth, tamed Pegasus with the aid of a golden bridle given to him by the goddess Athena. So Pegasus appears on many coins of Corinth and her colonies.

Tools for Professional Astrophotography and Astronomy

Page load link
We use cookies on our website to give you the most relevant experience by remembering your preferences and repeat visits. By clicking “Accept”, you consent to the use of ALL the cookies.
Do not sell my personal information.
Cookie SettingsAccept
Manage consent

This website uses cookies to improve your experience while you navigate through the website. Out of these, the cookies that are categorized as necessary are stored on your browser as they are essential for the working of basic functionalities of the website. We also use third-party cookies that help us analyze and understand how you use this website. These cookies will be stored in your browser only with your consent. You also have the option to opt-out of these cookies. But opting out of some of these cookies may affect your browsing experience.
Necessary Always Enabled
Necessary cookies are absolutely essential for the website to function properly. These cookies ensure basic functionalities and security features of the website, anonymously.
Functional
Functional cookies help to perform certain functionalities like sharing the content of the website on social media platforms, collect feedbacks, and other third-party features.
Performance
Performance cookies are used to understand and analyze the key performance indexes of the website which helps in delivering a better user experience for the visitors.
Analytics
Analytical cookies are used to understand how visitors interact with the website. These cookies help provide information on metrics the number of visitors, bounce rate, traffic source, etc.
Advertisement
Advertisement cookies are used to provide visitors with relevant ads and marketing campaigns. These cookies track visitors across websites and collect information to provide customized ads.
Others
Other uncategorized cookies are those that are being analyzed and have not been classified into a category as yet.
SAVE & ACCEPT
Go to Top